VACCINES: HOW A MILLENNIA-OLD LIFESAVER WAS, AND STILL IS, CONTROVERSIAL - Kwei Quartey

VACCINES: HOW A MILLENNIA-OLD LIFESAVER WAS, AND STILL IS, CONTROVERSIAL

In the era of Covid-19, we’ve heard a lot about vaccines and the international race to produce one. However, even if a successful vaccine emerges relatively quickly in the US, polls suggest that only 30-40% of Americans will accept the vaccine. In other words, hurry up and wait. The joint NIH-Moderna Phase 3 trial, which shows a lot of promise, has just hit a snag because they haven’t enrolled enough African Americans and Latinx subjects. Because of a long and shocking history of unethical experimentation on black people by white doctors, e.g. the Tuskegee Syphilis Study of 1932-1972, black people’s response to the suggestion of taking part in anything remotely experimental has been mostly, hell, no.

Vaccination, inoculation and immunization are often used interchangeably, but there are distinctions:

When I was a nerdy teenager, I loved to read murder mysteries, but my other interests ranged from philosophy to science. I recall being riveted to a paperback that chronicled the history of how scientists discovered bacteria and viruses, and the luminaries who marked the milestones along a fascinating journey that included the development of vaccines. We’re talking about Louis Pasteur, Robert Koch, Alexander Fleming, and so on.

My vivid imagination took me back to those bygone centuries when people ignored or misunderstood clues that science freely thrust under their noses. In May 1796, Edward Jenner, in an experiment that would have been deemed unethical in modern times, inoculated an 8-year-old boy, James Phipps, with fluid from a fresh cowpox lesion on the skin of a milkmaid. For years, Jenner had heard milkmaids say, “I shall never have smallpox for I have had cowpox. I shall never have an ugly pockmarked face.” Now Jenner wanted to see if that was true.

Over the next 2 weeks, Phipps had mild flu-like symptoms, but when exposed to the highly infectious smallpox, Phipps was protected from contracting the disease.  Jenner then did a little promotion of his vaccine, basing the word on vacca, Latin for “cow.” The 30% lethality rate and horrendous optics of smallpox drove the urgency of finding a cure or prevention. If a person survives, smallpox leaves the most appalling scarring–enough to make one suicidal.

Nothing Really New Under The Sun

However, Jenner wasn’t the first person to use the inoculation technique against smallpox. Variolation was practiced in China and India as far back as 1000 or before.

In 1648, there was a situation that will sound rather familiar to our modern ears: because of an outbreak of yellow fever in Barbados, Cuba, and the Yucatan, strict quarantine was imposed in Boston for all ships returning from the West Indies. Apparently, viruses weren’t done with Boston, because in 1657, there was a measles outbreak. In 1694, Queen Mary II died of hemorrhagic smallpox (variola hemorrhagica), a particularly vicious form of the disease.

As a child in Ghana, I learned about Jenner, Pasteur, Koch et al., but no one told me nor did I read about a West African slave who brought the practice of inoculation to New England. In 1706, a prominent Puritan minister called Cotton Mather purchased an enslaved West African whom he named Onesimus (Greek for “useful”) after the Biblical slave. This appears in the Epistle of Paul to Philemon, in which Paul says, “I beseech thee for my son Onesimus, whom I have begotten in my bonds: Which in time past was to thee unprofitable, but now profitable to thee and to me . . .”

Onesimus was one of about a thousand Africans brought to Massachusetts to be servant or slave. Mather hoped Onesimus would repent of “some Actions of a thievish aspect.” Apparently the irony of Mather’s slave ownership was lost on himself. Onesimus was clearly a smart cookie, because later on, he was able to buy his way out of bondage by paying Mather to purchase another youth, Obadiah, to serve in Onesimus’s stead. Slick move, although I feel sorry for Obadiah.

In 1721, yet another outbreak of smallpox ripped through Boston. At that time, Mather advocated  a technique of “ye Method of Inoculation,” remarking that six years before, he had learned about it from “my Negro-Man Onesimus, who is a pretty Intelligent Fellow.” Mather had informed the Royal Society of London that Onesimus “had undergone an Operation, which had given him something of ye Small-Pox, and would forever preserve him from it, adding, That it was often used among [Africans] and whoever had ye Courage to use it, was forever free from ye Fear of the Contagion. He described ye Operation to me, and showed me in his Arm ye Scar.” Accounts of smallpox variolation appear from scattered areas of ancient Africa, including Sudan, Ethiopia, and Southern Africa.

Hearing that this technique was also practiced in Turkey, Mather mounted a public campaign in favor of inoculation, but the large majority of white doctors in town were unwilling to try something suggested by an African, except for one physician by name of Zabdiel Boylston, who was the first American doctor to perform gallstone and breast removal surgery. In that same spirit, Boylston went ahead and performed variolation on 282 Boston inhabitants, keeping records on them and 5,759 non-inoculated residents who contracted smallpox. At the time, most people considered variolation ran counter to the will of God, and both Boylston and Mather met with strong opposition and even threats of violence. If this all sounds vaguely familiar, it’s because it is. Anti-vaxxers existed in the 1700s just as they do now, and the irony is that 300 years later, the rhetoric is almost identical. Eventually, Boylston was arrested and released only on condition that he would not inoculate anyone else without government approval.

But Boylston was eventually triumphant. Of the 282 inoculated patients, only 2% died from smallpox. Of the nearly 6000 non-inoculated, 15% died. Boylston presented his findings in 1726 to the Royal Society chaired by the Royal Society. 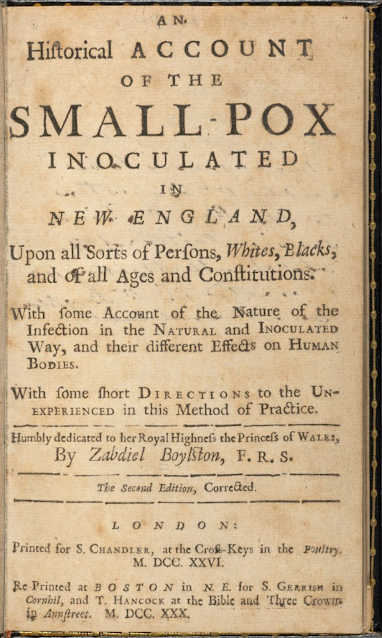 The history of vaccination and inoculation goes back millennia. Many people do not understand that large populations have given their lives through outbreaks of smallpox and other hideous and lethal diseases in order for us to reach modern times in which lifesaving vaccination is available. Smallpox has been largely eradicated in the world as a result, and countless deaths are prevented from diseases like rabies, meningococcus, polio, diphtheria, tetanus, and yellow fever. Anti-vaxxers should carefully consider whether we really want to return to the 18th century or earlier. Recall that were it not for the development of a smallpox vaccine over the centuries by the pioneers including Onesimus, our children could still be ravaged by the horrifying and deforming affliction shown in the figure above.

The inoculation story has been largely told from the Eurocentric standpoint, but variolation, a procedure of the same principle, was practiced elsewhere, including in Africa, long before Jenner unveiled vaccination. Yet one would be hard pressed to find widely-known accounts of Onesimus’s contributions to a medical practice that has been a bedrock of public health and the eradication of disease.

For a detailed history of vaccines, I highly recommend you spend a few minutes looking at this timeline, and next post, I’ll talk about the modern age of vaccines.

PRESIDENT TRUMP IS GUILTY OF NEGLIGENT MANSLAUGHTER VACCINES: HOW A MILLENNIA-OLD LIFESAVER WAS AND STILL IS CONTROVERSIAL–Part 2

This was great information for me, because I am 80 years old and love to learn new things. What I have the problem with are what they use as carrier serums. Prevnar vaccines are 50 percent aluminum.

Prevnar-13, Pneumovax and other vaccines do contain aluminum, not as the metal itself but as an aluminum salt, like aluminum phosphate, which are called adjuvants to boost the immune response. A 0.5 ml dose of anti-pneumococcal vaccine contains 0.125 mg of aluminum salt. However, aluminum in some form is present in our diets as well. In fact, infants get more aluminum from breast milk and formula than one dose of Prevnar. Kidneys can handle aluminum salts and excrete them. I’m not risking getting pneumococcal pneumonia just because of a little aluminum that my kidneys can dispose of.

This site uses Akismet to reduce spam. Learn how your comment data is processed.